To share your memory on the wall of Christopher Miller, sign in using one of the following options:

The journey of life has concluded on Saturday, October 12, 2019 for Christopher Lee Miller.

The journey of life has concluded on Saturday, October 12, 2019 for Christopher Lee Miller.

He was born in Calgary on February 4, 1987. Chris' first love was music. He joined the children's choir in grade 5 and by grade 7 he had picked up his first instrument, the saxophone. His love of choir took him on journeys to places he would have never seen otherwise. With the choir he was able to travel to London, Paris and Japan, to name a few.

In Junior High, he discovered another love. He started going to youth group. There he met Jared, one of the youth group leaders who became his mentor. It was through him that Chris met Jesus. Chris dedicated his life to the Lord shortly after that.

In winter of 2014, he met a young lady that he adored, Kristen. They married in October 2015 and they welcomed William Robert on February 28, 2016. Chris was overjoyed. He was a loving and devoted father.

Chris was predeceased by his grandparents, William and Christine Miller and Sonia Berezinski as his uncle, Walter Berezinski.

Chris leaves to mourn his son, William and his wife, Kristen; his mother, Nancy and her husband, Gaets; his father, John and his wife, Sylvia; his brothers, Justin and Troy; his godparents John Berezinski and Lois Sakowski as well as numerous aunts, uncles, cousins and many friends.

His journey was not without its difficult moments but one would never know that by his kind heart and caring personality. He was the hands and feet of Jesus. He showed others love when no one else would. He also fought for the underdog, the forgotten, the unloved and the lost.

If he was here today, he would tell you, don't let the enemy in.

In lieu of flowers, the family would appreciate donations made in Chris’ memory to The Calgary Dream Centre.

Receive notifications about information and event scheduling for Christopher

We encourage you to share your most beloved memories of Christopher here, so that the family and other loved ones can always see it. You can upload cherished photographs, or share your favorite stories, and can even comment on those shared by others.

There are many things I remember about Chris, most taking place in Bowness High School where I first met him and continuing in University until he went back to Calgary.

The ones that stick out the most are of his incredible kindness to me; from saying hello, introducing me to new people, school clubs such as Random Acts of Kindness, a church at one point, and overall making me feel welcome in a place of uncertainty for myself. People everywhere seemed to know who he was, his smile and laughter was infectious. If I didn't see him in band class rocking that saxophone, it was listening to him sing in choir, perform musical theatre in a lead role, or help Chris Connie and I put together a short film on Tommy the Trojan our school mascot. I think its still on youtube... watch at your own risk.

The other memories include discussions of superstars in the WWE, I believe Edge or Chris Jericho were amoung his favourites, or just small talk while we all were hanging out upstairs in our favourite hallway. I heard many stories of Chris Miller from what felt like everyone, people knew who he was and loved hanging around him. He helped me not take myself too seriously, even pulling a prank or two on a Band Trip to B.C on me, which I won't give the details of though I'm sure Brendan Grossberndt remembers as well. He always made me laugh, even when I tried my darnedest not to, and I thank him for it.

I will miss him, and I'm sad I lost touch with him post-University. I'm also sad I can't be there today with everyone else who knew him as I'm currently in Basingstoke, United Kingdom. He and his family are in our (my wife and I) thoughts and prayers through this difficult time.

Posted Oct 22, 2019 at 02:28pm
With deepest sympathy, our thoughts and prayers are with your family in this difficult time. Chris was a lovely friend I had the honour to know.

Posted Oct 21, 2019 at 10:00am
I'm absolutely devastated over this. There are dozens of great things I'll think of that will remind me of Chris. I'll always remember his sweet disposition, and thoughtful attitude. I'll especially cherish the time he made me a special birthday dessert all in pink, my favourite colour. He just wanted to make me feel special and loved because I was his friend's mom. A heart the size of a lion. Trusting he is at peace now, safe and sound. Take care Chis... always loved, and always missed.
Comment Share
Share via: 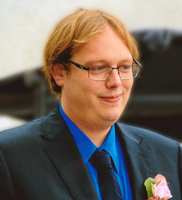