To share your memory on the wall of Elroy Bilan, sign in using one of the following options:

It is with heavy hearts that we announce the passing of our son, brother, uncle, and friend, Elroy Bilan. He was predeceased by his father Eli ... Read More
Elroy Bilan
February 6th, 1965 (Yorkton, SK) - Wednesday, June 12th, 2019 (Calgary, AB)

It is with heavy hearts that we announce the passing of our son, brother, uncle, and friend, Elroy Bilan. He was predeceased by his father Eli Alexander. He is survived by his mother Stella Bilan, brothers Dean and Steve, sister Kim, nephew Shae and extended family and friends.

At an early age Elroy’s parents moved from the family farm near Melville, SK to Calgary where he resided until his passing. He graduated from Western Canada High School and then attended SAIT for a short time. He then worked as a courier, in seismic, construction and other occupations. In his younger years he enjoyed playing hockey and dirt bike riding. One passion that never changed with him was his love of music.

You could always find him out riding his bicycle all over the city either by himself or with friends. When he wasn’t out bicycling or driving his car around you could usually find him building his next new and improved bicycle or working on a vehicle. When working on a vehicle it would usually be with his Dad. There were many trips taken with his Dad to any of the car part places in the city.

A Celebration of Life may be held at a later date. Donations may be made to AARCS – Alberta Animal Rescue Crew Society.
To view and share photos, condolences and stories of Elroy please visit www.choicememorial.com. Arrangements entrusted to the care of Choice Memorial Cremation & Funeral Services (403) 277-7343.
Read Less

Receive notifications about information and event scheduling for Elroy

We encourage you to share your most beloved memories of Elroy here, so that the family and other loved ones can always see it. You can upload cherished photographs, or share your favorite stories, and can even comment on those shared by others.

Plant a Tree in Memory of Elroy
Plant a tree 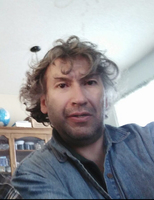