Use the form above to find your loved one. You can search using the name of your loved one, or any family name for current or past services entrusted to our firm.

Click here to view all obituaries
Search Obituaries
Immediate Need
We are here to help you. If you have need of our services, please call us, day or night, at:
(403) 277-7343
To better prepare yourself, we have provided you with some helpful information regarding the immediate need process.
Contact Us / Location

Ordering flowers from our site ensures that your order will reach us or the family in a timely manner, and your gesture of support will remain acknowledged in the Book of Memories for future generations. We only work with local florists so we can maintain the sense of urgency and quality of your selections. We thank you for helping to support the family during their time of need, and will fondly remember your kind gesture.

To share your memory on the wall of Hubert Buehner, sign in using one of the following options:

A receipt has been emailed to the address provided. A receipt may also be printed.

Hubert was born in Bordesholm, Germany on August 11, 1926 to parents Ella and Bernard Buehner. He was born a twin but his twi... Read More
In Loving Memory

Hubert was born in Bordesholm, Germany on August 11, 1926 to parents Ella and Bernard Buehner. He was born a twin but his twin brother did not survive at birth. The doctor said Hubert ‘would not survive a week’. So we are blessed that Herb lead a healthy and happy life with us for a grand 93 years!

In 1930, Hubert’s mother came to Canada with Hubert and his brother Sandy to join Herb’s father in Claybank, Saskatchewan. The family resettled on an 85 acre farm near Maryhill, Ontario in 1936. As the eldest of six children, Hubert worked hard on the family farm while still attending school. He left the farm in 1948 and made his way to Calgary, Alberta by 1949. Herb helped to build projects such as the TransCanada Highway, Kananaskis and Spray Lakes power lines, runways at the Calgary Airport, and installed the first power pole in Drayton Valley. In 1961, Herb started his 30 year career at Kingsway Transport Company, achieving ‘Driver of the Year’ awards and earning his ‘2 Million Safe Driving Miles’. Herb retired in 1991 and is remembered as a very likeable and hard working man.

Throughout his life, Herb enjoyed his family and friends. As a younger man, he took his family on camping trips, trips to Disneyland, and they often spent summers helping out the family on their farms. He liked to golf, bowl, play darts, pool and win cribbage tournaments at the Legions. In his retirement, his priority was to spend time with his family, play cards, golf, garden, and watch Jeopardy, Wheel of Fortune, the Lawrence Welk Show, and Blue Jays
baseball. He always remembered family birthdays and special occasions, and took frequent trips to Ontario, Florida and the Okanagan.

A Memorial Reception will be held at the Royal Canadian Legion Chapelhow Branch #284 (606 38th Ave, NE) on Sunday, Nov 3, 2019 at 2:30 pm. Please bring along any stories, mementos, pictures, picture presentations for the projector, or anything else you would like to share.
Read Less

Receive notifications about information and event scheduling for Hubert

You will receive any future notification messages.

We encourage you to share your most beloved memories of Hubert here, so that the family and other loved ones can always see it. You can upload cherished photographs, or share your favorite stories, and can even comment on those shared by others.

Posted Oct 30, 2019 at 07:45pm
Please accept our most heartfelt sympathies for your loss... Our thoughts are with you and your family during this difficult time. Dan,Suzie Neil,Eric

Flowers were purchased for the family of Hubert Buehner. Send Flowers 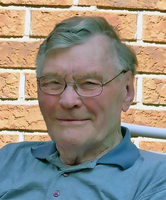