To share your memory on the wall of William Russnak, sign in using one of the following options:

It is with great sadness that we announce the passing of William (Bill) Edmund Russnak on June 23, 2019.
A devoted husband, loving father, caring brother, and faithful friend, Bill led a life full of joy, laughter, and compassion for those he held dear. Bill leaves his family and friends with countless memories to cherish.

Bill was born on March 11, 1952 in Edmonton, Alberta to George and Sonia Russnak. Bill was the middle child in a family of five children. Bill’s eldest sister Victoria (Vicky) and older brother Donald (Donny) were the first to welcome Bill into their family. Later, Bill and his siblings would welcome two younger sisters, Elaine and Katherine (Tina). The family would eventually settle in Bowness, Alberta in the early 1960s before the little town became part of the City of Calgary.

Bill formed several lifelong friendships within the community and like many who called Bowness their home, held a lifelong connection to the community. Bowness is also where Bill met Susan and was first married. Although they would spend several years apart, they would eventually find each other again, spending the last 20 years of his life together and remarrying in 2012.

Bill always had an entrepreneurial spirit and worked hard to get ahead. In grade school, Bill earned extra money by selling bags of doughnuts door-to-door and in his middle age, Bill owned and operated a hotel in Whitecourt, Alberta with his two cousins. Bill also enjoyed a long and reputable career in the floor covering industry as a journeyman Floor Covering Mechanic, operating his own installation company for several decades. In later years, Bill would briefly instruct at SAIT, teaching new Canadians the fundamentals of the floor covering trade.

Bill spent his final working years as a Warehouse Manager with the Community Kitchen Program of Calgary. Bill fondly recalled the friendships he established with his colleagues and thoroughly enjoyed this work. It allowed him to play an integral role in helping others who were in need and whom he felt were very deserving of a hand-up. This work authentically reflected Bill’s very own nature as a kind, empathetic, and selflessly-driven man.

Bill was extremely proud of his son, Kaesy Blake, whom he had with his second wife, Mariette. Bill provided lifelong guidance and support to his son, teaching him valuable life lessons and sharing his own knowledge so his son would successfully find his own way. Bill prioritized and ensured Kaesy’s pursuit of lifelong education. Bill was beaming with pride when his son received his Master of Education degree in 2017, adamantly attending Kaesy’s convocation while he was undergoing treatment for his own illness.

In the last few years of his life, Bill was visited regularly by family, friends, and many loved ones. Bill spent unforgettable time enjoying a few fishing trips (his favourite pass time), travelling on memorable road trips, and attending several family gatherings on holidays and other special occasions.

Although Bill faced a long, arduous battle near the end of his life, his journey was always encountered head-on with strength, resolve and determination, and notably without self-pity or selfishness. Bill always had the well-being of others at the top of his mind. Bill also held his sense of humour very dear, and continued to laugh and smile right up to the very end. His kind, lovingly affectionate and humorous demeanour was among his greatest traits.

Bill spent the last part of a three year battle with his illness in the loving and caring presence of his family and friends at the Agapé Hospice in Calgary, Alberta. During this time, Bill was provided with nothing short of the best care by everyone at the Agapé Hospice. He was afforded a restful, dignified and comfortable experience as he embarked on the final leg of his journey. The Russnak family is thankful for the Agapé Hospice and all of their efforts in providing Bill with the upmost care and peacefulness leading up to and during his final hours. We are eternally grateful to you all.

Bill is survived by his loving wife Susan, his son Kaesy (Lindsey), and his sisters Vicky Gunderson, Elaine (Jake) Scheper, and Tina Russnak. He is predeceased by his parents, George and Sonia Russnak, and his brother Don Russnak.

In lieu of flowers, Bill’s family asks those who wish to offer a remembrance of Bill to consider making a donation to the Salvation Army’s Agapé Hospice in his name. In this way, others who may need the same care and peace that Bill received, may find it as well. Bill would surely be delighted by this type of gesture.

A Celebration of Bill's Life will be held at a later date.

Bill is lovingly remembered by all for a life well lived. Rest well now, forever in peace, and until we meet again.

Receive notifications about information and event scheduling for William

We encourage you to share your most beloved memories of William here, so that the family and other loved ones can always see it. You can upload cherished photographs, or share your favorite stories, and can even comment on those shared by others.

Posted Jul 02, 2020 at 08:44pm
Honey is been just over 1year since you had to leave me. There’s not a day that I don’t think of you and that silly little grin you always had. We celebrated your life on the 1year passing. I’ll always love you and there will never be another man in my life. A lot has changed since you left and believe me you’re in the better world. I’ll see you soon baby. Kisses and hugs
Comment Share
Share via:
S

Posted Jul 29, 2019 at 06:01pm
My Uncle Bill...what can I say...So many memories and laughs! He was a man to be looked up to by all! A hard-working man who listened, guided, helped and genuinely cared for his friends and family. I will miss our phone chats, coffee sessions solving the worlds problems (mostly mine), the time we spent "shopping for fruit" and our all night rumoli games. My heartfelt sympathy and condolences to Auntie Susie, Kaesy and Lindsey and Max. Thanks for taking such great care of my Uncle Bill. Until we meet again, Rest In Peace, you are missed and your memory is cherished.
Comment Share
Share via:
GH

Posted Jul 11, 2019 at 02:06pm
Bill came into our lives when Kaesy and Lindsey became a couple 15 years ago. Over the years we have come to know Bill as a caring and compassionate man who was devoted to his loving wife Susan and his treasured son Kaesy. Bill was a good natured man who enjoyed the company of family and friends and was always willing to go the extra mile to help those in need. We will fondly remember the Christmas dinners, visits to the Kootenays, the work and fun that we shared when celebrating Lindsey and Kaesy’s wedding. Bill and Kaesy had such a great time on their boys Road Trip last summer; the beautiful scenery, visiting friends, fishing and hanging out with the guys were highlights. Bill will be missed but we will always have special memories of this loving and caring man.

Posted Jun 29, 2019 at 11:58am
Wishing Billy’s wife, Susan, his son Kaesy (and wife Lindsey), and his immediate and extended family (Ewasiuk’s/Grekul’s) my sincerest condolences. He was a very honourable, kind-hearted, and funny man. Always telling stories that would have you in stitches! I will remember him being a soft and caring man, yet quick-witted even through his illness. I enjoyed our conversations, and especially working with him installing floors for awhile in the early 2000s. He was keen to teach and pass along his years of experience. Was especially grateful for his tenderness and compassion when I needed it over the last few years. I can only hope that it was returned well enough in support whenever we saw him at family holiday dinners or BBQs over the last few years. Loved seeing him at Tim & Kelly’s for Easter this year... seeing his strength and ever-present humour despite the ravages of his illness — that will be my lasting memory. Billy — you were one-of-a-kind, and will be truly and deeply missed! I will crack open a bottle of the good scotch and raise my glass to a man who lived his life on his terms and most certainly left his mark and legacy of an amazing life well-lived!
Sincerely,
Scott Jones
Comment Share
Share via:
JS 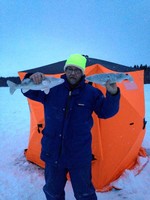