To share your memory on the wall of William (Tony) and Maddy Spurrell, sign in using one of the following options:

It is with heavy hearts that my brother Tony and I announce the passing of our parents on April 28 and September 5, 2019, only 130 days apart after being together for 71 years. Mom had a difficult tim... Read More
William (Tony) and Madeline Spurrell

It is with heavy hearts that my brother Tony and I announce the passing of our parents on April 28 and September 5, 2019, only 130 days apart after being together for 71 years. Mom had a difficult time dealing with the absence of Dad, missing him so much that I am sure she died of a broken heart. Dad was 93 and Mom was 95 and we realized how graced they were to live such a long and fruitful life together.

Born in St. John's Newfoundland in 1926, Dad was the extrovert in the relationship while Mom was content to stay on the sidelines and look after the family. Dad was a musician at heart and had a wonderful voice that he shared with many in his role of lead singer with some of the big bands and orchestras throughout his lifetime. Mom loved nothing more than to sit in the audience and listen as he entertained the people who came to dance the night away.

Mom was born in the beautiful little fishing village of Happy Adventure in Newfoundland. At the age of 18, she moved to St. John's to live with her sister Winnie and her husband Doug. She worked for the White Clothing Company as a seamstress. Little did she know that Dad was working on another floor where he cut out materials for the men's suits that she sewed together. Impressed by the quality of the workmanship of one cutter, she sought to meet the man who she would eventually marry and spend the rest of her life with. They started courting and were married within six months. Mom never lost her love affair with clothes and the woman who died at 95 years old had the same passion for style as she did when she was 20.

Dad was a survivor of one of the greatest fire tragedies in the history of St. John's in which 99 people lost their lives. At the age of sixteen, he had gone to the Knights of Columbus Hall to listen to one of his favorite bands when a fire broke out. In the panic and confusion that ensued, Dad managed to get out alive and ironically ended up singing with the band that had been on stage that tragic night.

In 1946, Dad went to Vermont USA as a volunteer through a program to help farmers during the post war rebuilding years. He was given the nickname Tony because there were too many men with the same name, Billy. This nickname stuck with him throughout the remainder of his life except for some of the close family members who continued to call him Uncle Billy. During this time, he was exposed to some of the more famous big bands, often hitchhiking to the larger centers near Burlington, just to enjoy the music.

In later years, Dad and Mom owned a variety store in Topsail, Newfoundland for 10 years before moving to St. John’s. In 1969, they moved to New Glasgow where Dad worked for Clarke Tire as well as Prudential Insurance. In 1974, Dad transferred with Prudential Insurance to Dartmouth N.S. where they became members of the Newfoundland Club. They spent many nights with new friends listening to music, dancing, playing in the dart league and of course bingo. Mom loved bingo and was lucky winning the jackpot on several occasions.
Mom worked for the Dartmouth School Board and after retiring from Prudential, Dad went back to work for Robertson’s Candy before packing it in and moving to Sea Side, New Brunswick to be near my husband and myself. They quickly made some special friends in Sea Side, especially their neighbors Donnie and Cheryl Gallen who treated them like family. They really enjoyed their new home at Sea Side and all that country living had to offer. As a member of the Benjamin River Church choir, Dad was once again in his element singing and taking part in church concerts.

In 2014, Mom and Dad decided to move out to Calgary, Alberta so that they could spend time with my brother Tony and his family and our children, Jennifer and Jordan and their families.

Their deaths in 2019 marked the end of a long life together so it wasn't unexpected that they wouldn't want to be apart for too long. Celebrations of Life for Mom and Dad were held at my brother's home and we want to thank all those who attended to help celebrate their lives with food, song and remembering their lives together as they would have wanted.

Mom and Dad leave behind an immediate family consisting of myself, Linda and my husband Gord, my brother Tony and his wife Sherri, grandchildren Jennifer, Jordan, Patrick, Kristy and Jill and great grandchildren Lucy, Alec, Maddison, Alexis, Lincoln, Archer and Wyatt and Heath. Also left behind is Mom's only surviving family member, her brother Selby (Sylvia) as well as many nieces, nephews and cousins. She was predeceased by her brother Lloyd and sister Dot and by her sister Winnie with whom she had a special relationship for her entire life. Aunt Winnie passed away in March of this year at the ripe old age of 103. Dad was predeceased by his brothers Wilfred, Gordon, and sisters Doris and Blanche. Our wonderful Aunt Blanche passed away two years ago at the ripe old age of 100.

Tony and I want to give a warm thank you to their nieces and nephews; Vivian, Ron and Dave Randall, Marg and Roma Williams, Dave Potter, Jean Murcell and Faith Stagg for the special relationship they maintained with our parents throughout their lives. We also want to express our appreciation to Lisa Dalgleish, who was a special friend to both Mom and Dad and helped take care of them regularly while living in Calgary.

Mom and Dad were both animal lovers and should anyone wish to donate in their memory, I am sure that donations to support the SPCA would make them incredibly happy.
Read Less

Receive text or email updates for William (Tony) and Maddy

We encourage you to share your most beloved memories of William (Tony) and Maddy here, so that the family and other loved ones can always see it. You can upload cherished photographs, or share your favorite stories, and can even comment on those shared by others. 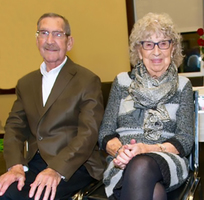